This year’s NZ International Film Festival offers those interested in fashion and/or museums some real treats.

Look out for the following:

YVES SAINT LAURENT : France 2014 : Director Jalil Lespert – An intimate study of a fashion genius in a biopic that spans 20 years, from Saint Laurent’s arrival at Dior to the founding of his own YSL label. The clothes used in the film are Saint Laurent originals! 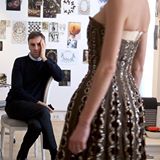 DIOR AND I : France 2014 : Director: Frédéric Tcheng – An elegantly poised and charming study of a fashion house that follows designer Raf Simon’s first collection for Dior (2012) from concept to catwalk. Includes archival footage of and quotes by Christian Dior!

AND, FOR MUSEUM LOVERS…Don’t miss these two gems!

THE GREAT MUSEUM (Das grosse Museum) : Austria 2014 : Director: Johannes Holzhausen – An enthralling, multi-layered portrait of the Kunsthistorisches Museum in Vienna, shot over a year while sections of the vast classical building were closed for renovation.

NATIONAL GALLERY : USA/France 2014 : Director: Frederick Wiseman – Another wonderful ‘hands-off’ documentary from Wiseman who turns his camera on the Old Master paintings, the people who lecture before them, those who conserve them, and the staff dedicated to preserving the museum’s reputation as one of the greatest art collections in the world.

For more information go to the NZIFF website: http://www.nziff.co.nz/2014/

This entry was posted in Local events, Movies. Bookmark the permalink.