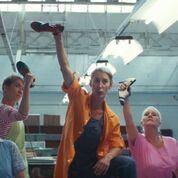 Julie and the Shoe Factory

It’s time for the annual film preview postings. This year, the frock movies start with the Alliance Francaise Film Festival, which is offering us accessories. Shoes and umbrellas, to be precise, starting with Julie and the Shoe Factory, a ‘musical and social comedy, a recent film with echoes of the festival’s closing film, the much celebrated The Umbrellas of Cherbourg. Which is also a musical, only tangentially a style film but oh, what style it has. For trailers and screening details in 10 locations around the country in March-April: