Posted on September 19, 2018 by karinwarnaar The opening night, 5.30 – 8pm on Friday 21 September 2018, which is also the welcome to the symposium, and includes a Citizen Styled event by Professor Margo Barton.
The Dunedin School of Art Gallery is in P Block, Otago Polytechnic – Te Kura Matatini ki Otago, (Entrance off Riego Street. For those unfamiliar with Dunedin, this is at the stadium end of Albany Street).
https://www.op.ac.nz/students/campuses/dunedin/map/ 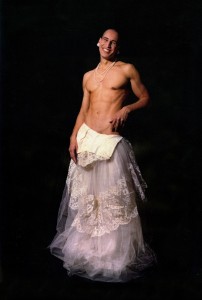 Unbound: the exhibition presents artworks in response to Christine Webster’s Cibachrome photograph of model Tamati James from the series, Black Carnival (1993-97), an image chosen as a contemporary contrast to Tearing off the Bonds (1912) by American cartoonist Lou Rogers, the image that appears throughout symposium paraphernalia.  These images bookend dialogues about women’s liberation surveyed over the weekend of the symposium.

The yet still dangerous image of James in Black Carnival #48, 1995, his body partly veiled in a white wedding dress, body luminous in a black void, smiling eyes, gazing at the viewer, blurs gender assumptions, notions of desire, and links to continuing debates on the fluidity of dress, bodies and sexualities, contemporarily relevant to the current moment of social rights activism today. While Webster’s image is from the early 1990s, in 2018 the curators feel that it reiterates the goals of the suffragists and suffragettes[1]. Although suffrage was associated strongly with women’s rights, Smith and Bell are interested in recalling the wider historical search for equality and equity, for all people, in relation to the impact over the last 20 years of Queer Theory and the current recognition of the plurality of gender and sexual identity in Western cultures. In this manner, we feel that Unbound: the exhibition echoes the spirit of those early women and their courage to stand up.

Webster’s exploration of sexualities (gender ambiguity, eroticism, fantasy and masquerade) in the wider Black Carnival series remains important as today discussions around sex continue to be heavily framed by a white, heterosexual, male gaze. Centering female desire for example, in contemporary Western culture, (a seemingly liberal context where anything goes) is vital, as women’s perceived sexual (emotional, physical, intellectual and economic) liberation continues to be underpinned by constricted, if not outright dangerous, conditions.  This is not limited to women, as LGBTQIA+ (lesbian, gay, bisexual, transgender, queer, intersex and asexual) people continue to experience discrimination and inequality. Yet there are collaborators too, in dialogues for change. For example the Me Too[2] movement (founded in 2006), galvanized global communities in 2017 to address and transform sexual violence narratives with the powerful #metoo viral hashtag. We are again in a time of fear and bravery. To act in the face of subjugation is to emancipate oneself from the bonds of patriarchy.

The artists in Unbound: the exhibition responded in diverse, yet simultaneously cohesive ways to Webster’s image, unbinding and opening up new discourses on gender, bodies and sexualities, through the frame of dress, in a diverse range of media. Simon Swale in collaboration with designer and stylist Dylan McCutcheon-Peat explores the masculine gaze while Marie Strauss with Justin Spiers and Margo Barton in her work Citizen Styled, highlight that dress needs the body to create meaning. Through performance the garments come to life — fashion becomes art.  Michelle Mayn uses the interstitial spaces of weaving and assemblage to play with shadow and light, which both Strauss and Spiers also do through the use of a lightbox, to develop a commentary on the complexity of identity. Anita DeSoto and Victoria McIntosh play with the past and the present in their work, highlighting the social and cultural norms to which women are often bound, and have been bound across time. Steve Lovett works with notions of presence and absence and the ways we represent to ourselves and to others. Edwards + Johann explore masquerade in their photographic portraits; through dress up we have freedom and agency not bound by fixed identity categories. And jeweller Susan Videler makes the accessories one styles their identity with, forging a lovely complement to Barton’s performance.

[1] The suffragists were peaceful campaigners, the suffragettes were militant direct action campaigners who emerged after progress had stalled.  What is the Difference between the Suffragists and the Suffragettes, British Library, 6 February 2018. https://www.bl.uk/votes-for-women/articles/suffragists-and-suffragettes

2 Responses to Unbound: the exhibition